It's the most influential religion you've never heard of: Discordianism took the world by storm when it was revealed to two young hippies in 1958 or 1959. Who would have thought this goofy nuttiness would eventually turn into a worldwide caper involving the assassination of a US President, Timothy Leary, a rubber gorilla, a ten hour play, a million pounds of burnt cash, the German secret service, a pumpkin launching trebuchet, the Electronic Frontier Foundation, Charles Manson, twelve arrested New Orleans Mardi Gras participants, a series of murders, Kermit the frog, and an extremely confused Australian who wrote this very silly book? Not me, that's for sure. 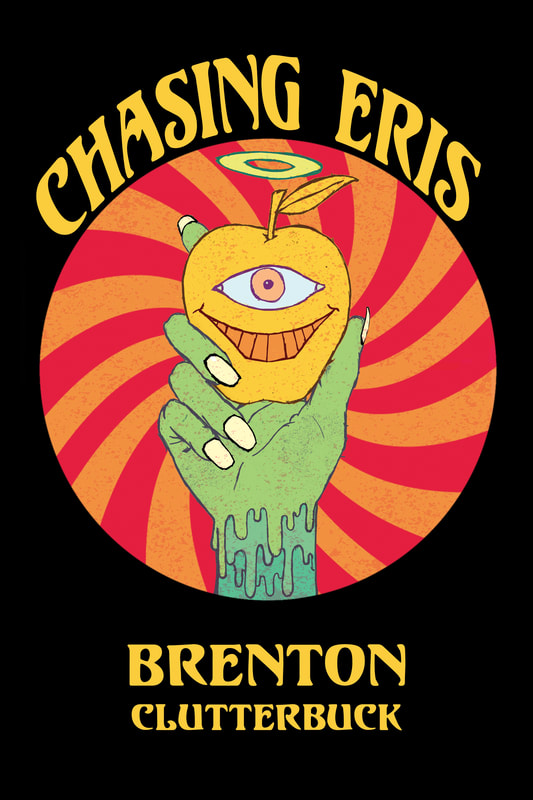 "Chasing Eris by Brenton Clutterbuck is a really good book, and everyone reading this blog should hunt up a copy and read it.

Brenton, an Australian, discovers Discordianism and embarks on a globe-spanning Discordian Odyssey to "find the others." He meets an impressive cast of characters. Many of them were new to me, but the people he interviews or listens to also include Adam Gorightly, Robert Newport, Louise Lacey and John Higgs.

Many of his anecdotes are funny, or amazing, or both." RAWIllumination

"There’s a sense of sheer delight in discovery in how Clutterbuck describes the individuals and groups he encountered on his pilgrimage... this is an indispensable book for anyone with an interest in Discordianism, modern religion and counterculture, or the sheer mania that comes from a few kindred souls playing with belief, chance and chaos" Cat Vincent.

"A marvellous journey through, into, and beyond Discordianism. The spirit of Discord is vivid, vibrant and diverse, and Discordians can actually be some of the most together peopleoids around, despite - or even because of - the chaos. This is a timely and rousing book from Mr Clutterbuck, and I say bravo to him and to all the wonderful peopleoids of the thriving discordian world." Leigh Wright.

"An excellent book! Very entertaining and informative, even spiritually illuminating, all at once. Definitely one to have." Ananta!

After we finish eating and pay, we travel to a store to buy drinks before heading down to a famous rock structure at the end of the beach, a Rio landmark known as Pedra do Arpoador. Fernanda has somewhere to be, so she bids us goodbye. It is getting late. Marcelo buys two apples with the intention of offering up each as a devotion to his two Goddesses. He finds one yellowish in colour for Eris and a nicer looking one for Aphrodite.

We climb the rock. There is no kind of safety barrier here, so if you fall it’s going to be painful at best. We are carrying drinks in low quality plastic bags, cautiously stepping up the rock in the limited evening light. We sit. The humid night air is punctuated by cool breeze. In the distance we can see the lights shine out from a favela.

There are metal rings nailed securely into the rock at the very top.

“This is where they chain up the strippers,” Maldonado tells me.

“The police have to come up here every night and chain the strippers to the rock,” Maldonado tells us. “Every night a giant eagle swoops down and eats them. In the morning they come up and there’s nothing but arms. The police then take the arms away so nobody sees them.”

Marcelo is staring out into the sea. The ocean is the domain of Aphrodite. He speaks about the duality of the solid rock coming in contact with the fluid ocean, of the deepness of the night and of the water.

“The ocean is deep and uncontrollable and vast like emotion,” he says. “You can’t control your emotion, but you can direct it. Like a sailboat.” The ocean is tied to love for him, to Aphrodite.

“But, I will ask nothing of love from Eris,” he adds. “Because she is a bitch.”

I chat with Mistre for a moment. Someone passes me a bottle of alcohol. I drink from it and pass it along. Mistre is telling me that he likes to connect with people on a deeper level. He is frustrated by small talk and conversations about nothing. He wants to talk about big things, ask big important questions like, ‘What are you afraid of?’ Marcelo tells us he likes to have big conversations about small things.

Marcelo closes his eyes, visualizing. “I am seeing something,” he says. “A white rabbit on white snow. Does anyone have Internet connection here? Can someone check if this is connected to Aphrodite?”

I google it. Chaos Magicians, unlike many other mystical traditions, have a tendency to embrace technology. My search confirms it. The rabbit is a symbol of Aphrodite.

I’m not sure how Marcelo performed his devotion to Aphrodite, but we’re left with the one apple to offer to Eris in devotion. Our company stands and begins to descend down the rock to discuss the matter.

When we reach the rocks below, we stand and look over the ocean. Julia (who is not named Julia yet) tells us that he has sometimes used Julia as a pseudonym. Our company had earlier discussed the Fenderson family (a Thornley concept: the Fendersons are a family one can be connected to just by having the Fenderson surname attached, even against their will), and these two things seem to collide elegantly. We quickly come to the agreement that Julia Fenderson is the right Holy Name for our shaggy haired companion.

Marcelo, meanwhile, is imploring everyone to not even consider hurling the devotional apple into the ocean. It’s pretty clear from the tale of the Original Snub that Eris and Aphrodite do not get along well, and this is his love life we’re talking about, which he would rather not resemble the Trojan war.

Julia, in the end is the most compelling with his suggestion. He wants to recreate the Original Snub by writing Kallisti on the apple, approaching some beautiful girls and telling them it’s a present for the prettiest; if they can agree amongst themselves who the prettiest is.

The progress from here resembles a series of stops and starts, walking a way down the boardwalk before stopping suddenly to discuss the matter, passionate rapid discussion in Portuguese, then continuing. There are disagreements of all sorts. This continues for something like an hour. Kaos Vortek has on him what I’m later told is an authentic Soviet gasmask he bought at a flea market earlier that day. He wears it for some time as we continue down the boardwalk. Eventually, after another passionate debate, we head towards the city of Rio, up and down streets until we get to a club.

Rajiphun Maldonado and Mistre take the apple, with kallisti scrawled across it in pen in to the club. They are gone barely a few minutes before coming back out with goofy grins on their faces.

“We just got trolled by Eris,” says Mistre. They had offered the apple with the attached conditions to a group of three girls. They had agreed, turned around to discuss, and thirty seconds later two of them pointed to the other and said, “We think she’s the prettiest.”
​
The pair gave over the apple.

​All the Discord that had been created by the ritual was amongst the Discordians.