When Cat Vincent was kind enough to write a review for my book Chasing Eris, he said one thing that stood out to me; my UK chapters focussed on history and were notably lacking in the kind of in-depth description of the people and scenes that are the lifeblood of other chapters. While it was very neat to wrap up some of the more historical elements of Discordianism in quick succession by following the KLF from England to Scotland, and dealing with Robert Anton Wilson just outside of the UK, in Ireland, I always felt a little bad for not including more of the more personal interviews I completed while in the United Kingdom. So, here’s a short collection of the UK stories published previously in blogs, magazines or not at all. 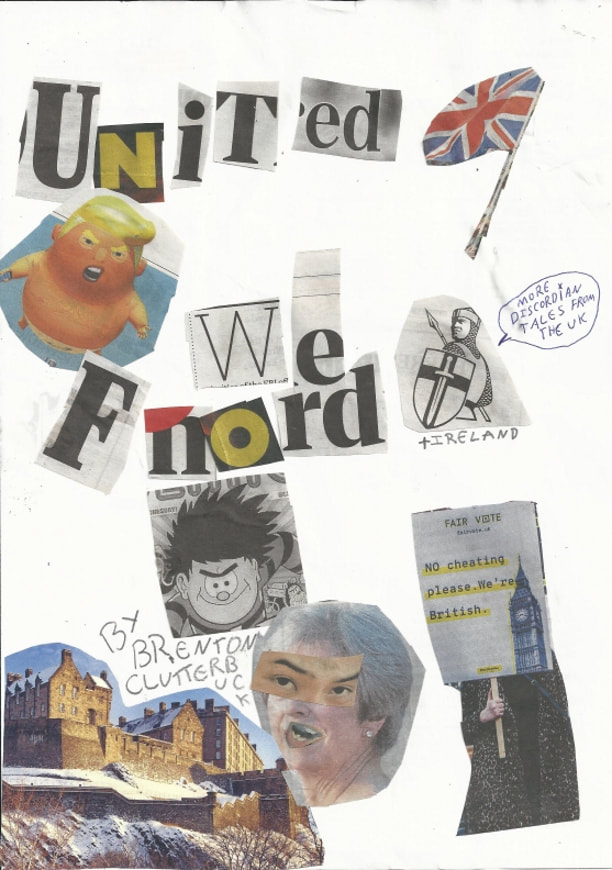 The books are stacked in a pile. We return to Syn’s hardcover edition of the Principia Discordia. This was actually the second time the PD was put into hardcover. The first was published by Revisionist Press. On his blog, Dr Jon says the following of the edition;

According to Run For Cover, a limited edition hardcover of the Principia Discordia was published by the Revisionist Press imprint of Gordon Press in 1976. I've no idea how large the print-run was, but their edition, ISBN 068575085X, apparently retailed for US$250.

Jon also details another interesting tid-bit; that the parent company of Revisionist Press, Gordon Press, was rumoured to be a CIA operation, due to their erratic order fulfilment practices and outlandish prices. This is contradicted by a piece of writing that has circulated the Internet, though the original source is lost;

Suffice to say there is no truth in this rumor, a mixture of a little knowledge and a lot of paranoia. “I wish it had been true about the CIA,” says editor Herb Roseman today. “We might have made some money!”

In reality, the Gordon Press of Brooklyn, New York was a small family business with an eccentric owner. When it closed in 2001, Run For Cover! was delighted to take over the remaining inventory, full of interesting, provocative and indeed eccentric titles, few of which were printed in quantities greater than 200, and many of which are available nowhere else.

Syn’s Discordian journey began with being bored at work. It was an IT job and there really wasn’t much in the way of IT work needing to be done. The company needed someone to tidy up when he first arrived, but the work quickly tapered off.

“Surfing, finding stuff, being interested in all sorts of weirdness anyway, I found Discordia, the forums and all that sort of stuff. I think the first forum I saw may not be there anymore, it was like a roleplay forum or something like that. And PrincipiaDiscordia.com.”

At the time that Syn got involved in the whole shebang, the winds of change were blowing through Discordia. Everyone’s favourite counterculture and recreational criminality publisher Loompanics was going out of business. Loompanics was also the publisher of the much loved ‘yellow cover’ Principia Discordia.

It seemed a shame for such a quirky little book to soon disappear from shelves. So Syn embarked on a one-man mission to save it.

“It would be a damn shame for that to go missing. So that’s why the hardback eventually came out many years later. Might be a year, couple of years after they went out of business.”

While Syn was working on his hard copy Principia Discordia, Ronin Press famously came out with their own Copyrighted interpretation of the Principia; All Hail Eris, Goddess of Chaos and Confusion. The layout, not the Copyleft text, was the only part Copyrighted, but it still pissed people off.

“When we discovered what they were doing, it was like an explosion all over the forums; swearing and all sorts of hell broke loose.”

This would not stand! The PD seemed destined to be replaced by a –shudder- copyright-restricted piggybacker. Syn continued on his mission to produce a new hardcover. He sat at working, using Microsoft Word to put it all together.

Once ready, he contacted a publisher called Exposure Press. It all started off fine. He emailed back and forth with the person in charge, and she told him what she needed; a PDF from his Word files. After a harrowing and horrifying experience trying to iron out the technical details, the book was finally ready for publication. Within a few weeks it was on Amazon.

“I have no real record of how many it sold now, but it was trickling in. I got my cheque every quarter. So that was cool for a while, until it turned out that the publisher was some sort super religious Christian end times Prophetess.”

In September 2008, Guardian newspaper financial segment Capital Letters published a letter from an author who had concerns about their dealing with vanity publisher Diggory Press. The author, a poet, had paid for their books but had received no copies, and no response to their emails. The following January, Capital Letters published a letter from another author in similar straits.

The paper had been contacted since then by ‘over a dozen’ other authors in similar situations. Despite the conspicuous absence of a phone number (and the sudden disappearance of the email feature) the paper managed to contact the author, 38 year old Mirian Rosalind Franklin, for a fruitless conversation, consisting of her asking repeatedly how they found her number, before hanging up.

One of the authors involved in the case reported that the case was seen in August, before being passed on to a later court date, due to what seemed to be obstructionist behaviour from Franklin.

One of the tangential features of this story that proved too delicious to ignore was Franklin’s website [http://endtimespropheticwords.wordpress.com] where she waxed lyrical on her own brand of theology, along with the occasional helpful end-times prophecy. The combination of the obvious hypocrisy of her rants against charlatans and deceivers in the face of Diggory’s shady business dealings, her targeting of darlings of the Christian Blogosphere such as evangelist Todd Bently and politician Sarah Palin, and the general tendency for online communities to eat their own young led to an Internet slap-fight of (ahem) Biblical proportions. Franklin posted her innocence under multiple identities on multiple blogs, and denied every allegation, while her chief antagonist, a character called Stephen T Moyer – one of the three plaintiffs who saw the case through to the end – documented every moment, and pursued his disagreements with her on multiple websites. Amongst the ultimately vindicated fraud accusations, the disagreement also spawned a virulent (and, I discovered with bleary eyes and throbbing head, ultimately un-fucking-readable) theological debate.

Diggory had a number of titles under its imprint. Unluckily for Syn, Exposure Press was one of them.

“I wondered where my cheque had gone one month. Oh, I haven’t heard anything, it’s usually the time something pops up. Nothing happened, didn’t hear, so I thought, I wonder what’s going on. Had a look and the site was shut down. So, OK, the publisher’s site’s gone, so I started to panic there. Not that it was a lot of money or anything, but it was just like, what’s going on? So I had a bit of a Google, a bit of a dig around on the web and it came about that the publisher herself had had some business problems. And it all came out that she had some religious ideas about the end of the world and stuff.

How Syn got his money is unclear to me after our interview, and my research doesn’t clarify it; I later ask him when he received his cash back; was he one of ‘the seventeen,’ the original group of legal claimants, later whittled down to just three on the final day of proceedings? Or did the eventual success of the claimants pave the way for him to claim his money with minimal fuss?

Neither as it turns out. He sent in a request for his funds, and got it. He told me he had ‘no idea’ why she didn’t just ignore him, as she did so many of the other claimants.

“Some of them got their money; I did. But I had to identify myself to [production company] Lightning Source to stop them publishing it, because they were sending her the money. So that’s how it ended up out of print. Because of that experience, it was kind of a lot of work to then start again and then republish it… That experience kind of put me off dealing with a third-party publisher.”

Where to find a copy: