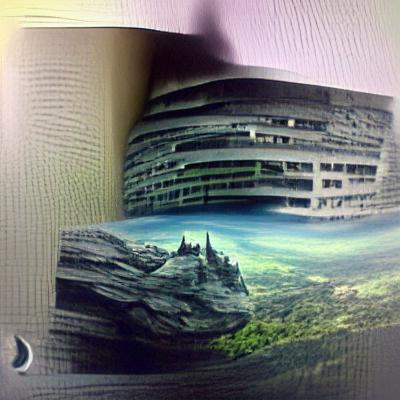 “The text you are about to read was generated by OpenAI, with prompts from Chasing Eris. It was then human and machine edited to its current form.

“I arrive in New Orleans late at night and begin to walk my bag through the dark and lonely streets. The now famous blue tarps can still be seen waving, the aftermath of a hurricane now a half-decade old. Down the road from my hostel sits half a home, torn open like a dolls house. The city seems to have the memories of Hurricane Katrina etched into it – but they’re not the only memories that lurk here.

Kerry and Greg moved into New Orleans together in 1961. Between this year and 1965, the Discordian society would undergo a period of significant growth. Here Thorney and Hill would interact with a number of figures who would make their own marks on the Discordian Society. One of these figures, a man known as ‘Brother-in-Law’ would boast of criminal links and make provocative political statements, including celebrations of Nazism. He would also go on to converse with Kerry – ostensibly playfully – about the best way to, say, assassinate President John F. Kennedy.

The first of two Discordian congregations, ‘The New Orleans Gathering’ attracted a number of young people. It also attracted the attention of law enforcement. Greg and Kerry were visited by members of the FBI and interrogated about their supposed links to anti-establishment political groups in America. They sat quietly as the agents – at least one of whom was apparently ‘a nice young man’ – asked questions about their work with groups ranging from the Black Panthers to the Ku Klux Klan. When asked about their views on these groups, Greg and Kerry had an unexpectedly succinct answer: they did not have any views on these groups. This did not stop the Discordians receiving a number of threatening letters from organisations such as the KKK – some of which claimed that Discordians would be killed if they attended certain events.

This is not to say that they were above playing up their apparent links to radicalism. In one letter, Greg made a jokey reference to his work with anarchists on a project involving ‘the destruction by fire of several very large buildings full of American citizens’. When asked why he wrote such letters, Greg replied: “Because it amuses me!”

There are a number of stories about the New Orleans Gathering which sound too good to be true – and may well be. In one, a high-ranking member of the KKK attends the ‘Gathering’ and is so impressed by the Discordians that he volunteers to act as a double agent. He is given a copy of ‘The Principia Discordia’, with instructions to give it to his superiors. On reading the text, they are so disturbed that they leave town immediately and are never heard from again.

Elsewhere, Kerry is said to have announced that there was going to be an anti-Vietnam march in front of government buildings in New Orleans. This had the potential to be disruptive – and would have been entirely fictional had Kerry not planted three newspaper articles announcing this march at intervals along his journey home from work.

Other stories are more grounded in reality. Discussions took place about tactics for attacking police – although it remains unclear how serious these discussions were intended to be. At one point Greg asked Kerry: “What do you think the best thing would be? Should we steal their guns off them and shoot them with their own guns? Or should we just shoot them?” In another letter, Greg wrote: “I am very glad I had JB for a roommate for about eight years; he taught me many tricks and interesting items which I am now employing. I am now much more fit as a revolutionary than I ever was before, because of his training.”

There are in fact two stories about how Kerry ended up living with Greg – one is that he was going to move into an apartment with some other students, but ended up moving into Greg’s after finding it cheaper. He would stay there for around eight years. In another story, Greg simply invited him over for tea at the apartment he was moving out of – and Kerry never left.

The New Orleans Gathering would eventually dwindle down to a core of four members: Greg, Kerry, one of their friends ‘Lady Jane’, and Lady Jane’s boyfriend ‘Sir Gregory’.

The group would most likely have dissolved entirely had it not been for the emergence of a new figure in the Discordian movement: a young man who called himself Lord Omar Khayyam Ravenhurst. Lord Omar had recently arrived in New Orleans from Atlanta with his girlfriend Lady Suzy Creamcheese – but it became rapidly clear that Lady Suzy was only part of the picture. The rest of Lord Omar was made up of another young man, Greg Hill.

Greg had used numerous aliases over his lifetime – so many, in fact, that even he himself apparently struggled to keep track of them all. Among other pseudonyms, he would go by the names ‘I.P. Freely’, ‘Dr Haka’, and ‘Gabriel the Marine’ – but none of these could compete with ‘Lord Omar Khayyam Ravenhurst’.

As Lord Omar, Greg came up with a list of 21 basic rules which Discordians were required to obey – the only rule was that they could not conduct themselves according to any rule book except Lord Omar’s – if they did this, they would be expelled from the Discordian Society (another rule was that anyone who attempted to make this rule canonical would be expelled as well).

You must always kill a cat when you meet one on a stair. Do this why? Because it is scientific…

You are INVITED to join the Discordian Society (D.S)…

No one ever knows what the D.S. stands for… If you ask anyone what it stands for he will tell you that it stands for the “Discordian Society” and if you ask him to define DISCORDIAN he will tell you that it is “the worship or philosophy of Eris, goddess of chaos, or a system of chaos”, and if you ask him what chaos is he will get mad at you because he doesn’t know and there ISN’T ANYTHING CALLED CHAOS OR ANY OTHER KIND OF THING ANYWHERE!

Eventually Greg would come up with an answer to the question: what did ‘Discordian Society’ stand for? His answer was: ‘Disciples Committed Only to Ridiculousness or Something’.

Greg was also responsible for making Lord Omar the patron saint of Discordia – a position which would eventually be taken over by Saint Gulik, a ‘little brown discarnate monkey god from Tibet who has an extremely high I.Q., sexually ambiguous tendencies, and an advanced degree in Tantric Yoga – but no actual body or form whatsoever’.

Lord Omar turned out not to be the only Discordian imaginary friend to have a name derived from the works of Omar Khayyam. Among those to be given this “to be given this infernal name were:

Omar Khayyam Wakefield – an alias used by Kerry Thornley, who said that this was the name he would use when he killed John F. Kennedy (‘Wakefield’ is an antonym for ‘Thornley’).

Omar Hammami – an American Islamic militant who joined al-Shabaab in Somalia. He was later killed in a US drone strike.

The New Orleans Gathering would eventually make its way to Atlanta, Georgia – where it was joined by Lord Omar and Lady Suzy ‘Creamcheese’. As Discordians continue to celebrate chaos throughout America, they also began to spread their message overseas – with one of their first disciples emerging in Nashville…